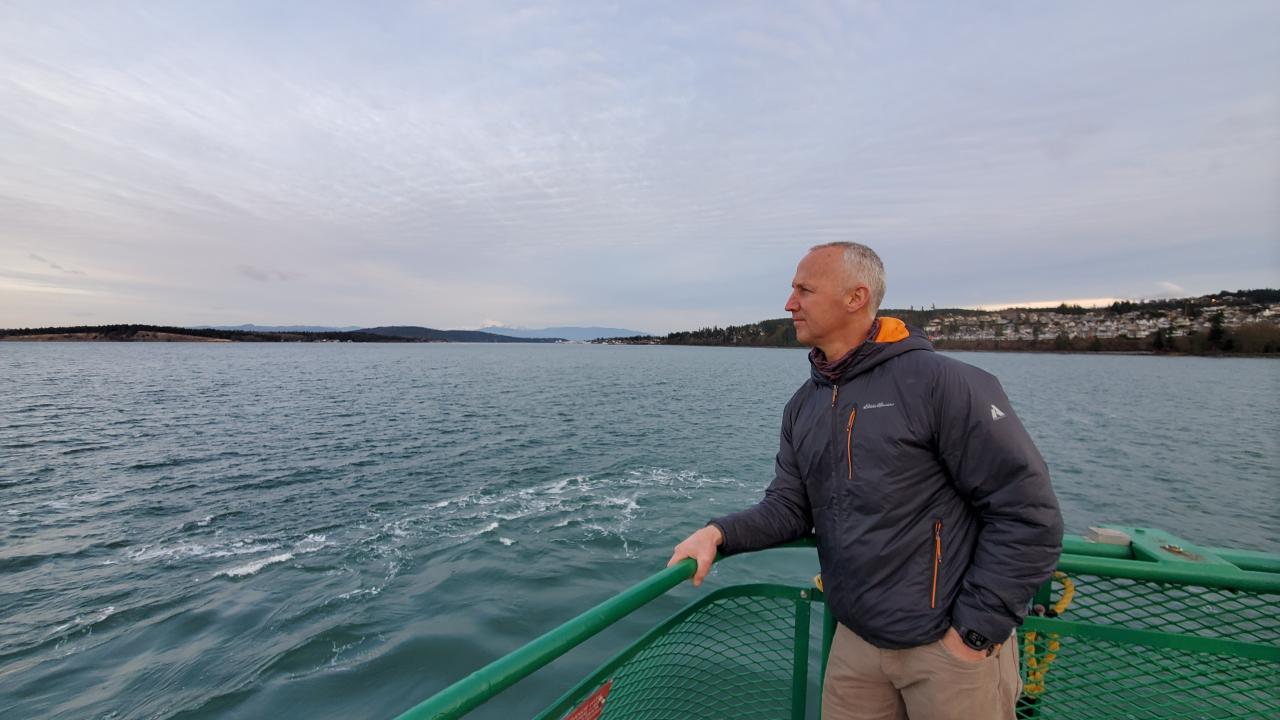 Dr. Joe Gaydos has served as the SeaDoc Society’s science director since its inception 20 years ago, when conservationists Kathy and Ron McDowell brought their idea for the science-based program to a team of wildlife researchers at the school. Friel is the filmmaker behind the SeaDoc Society’s adventure series, Salish Sea Wild.

As a program of the school's Karen C. Drayer Wildlife Health Center, SeaDoc works to ensure the health of marine wildlife and their ecosystems through science and education. Thanks to donors, the society conducts and funds research aimed at creating science-based solutions for marine wildlife in the Salish Sea — an inland ecosystem that’s home to the Puget Sound and Strait of Georgia, as well as the cities of Seattle and Vancouver. That’s a population over 8 million and counting.

Gaydos and Friel roll oﬀ the ferry and drive north to Bellingham Bay, where researchers with the Washington Department of Fish and Wildlife (WDFW) and the Tulalip tribe await them. Bedtime comes quickly, as they will be greeted by their alarms at 3:30 a.m. Friel will hit the water under the cover of night to capture, tag, and release surf scoters — striking and beautiful sea birds that are also a species of concern in Washington state. Gaydos will start his morning with a weekly Zoom meeting with the rest of the SeaDoc team before rejoining Friel.

Gaydos’ love for wild species and the natural world came early. For as long as he can remember, he’s felt a natural pull to the outdoors, going out to play and returning home with species of all shapes and sizes. He received his DVM from the University of Pennsylvania in 1994 and PhD from the University of Georgia in 2001. 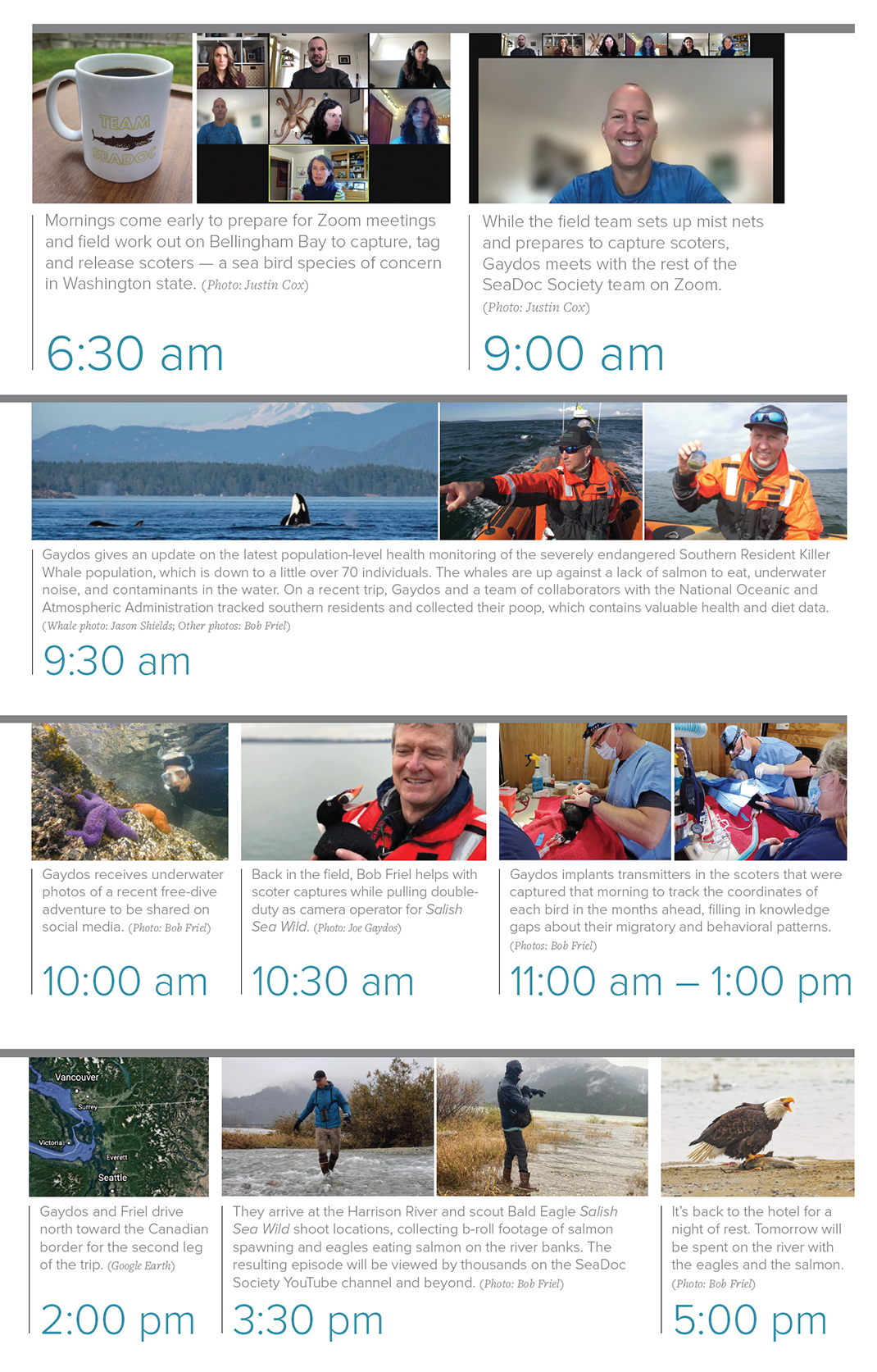 His focus on marine wildlife is something he’s nurtured with SeaDoc Society, and now he has a camera operator at his side for those adventures, which double as a chance to educate and inspire the public.

Like many other seabirds in the Salish Sea, surf scoters, white-winged scoters and black scoters have precipitously declined. Scientists are still working to identify the major causes, but food availability (including herring eggs), water quality, and nesting habitat are major suspects.

With the moon hanging over the bay, Friel and researchers from the WDFW set up lightweight mist nets tethered to two ﬂoating rafts, with the whole system 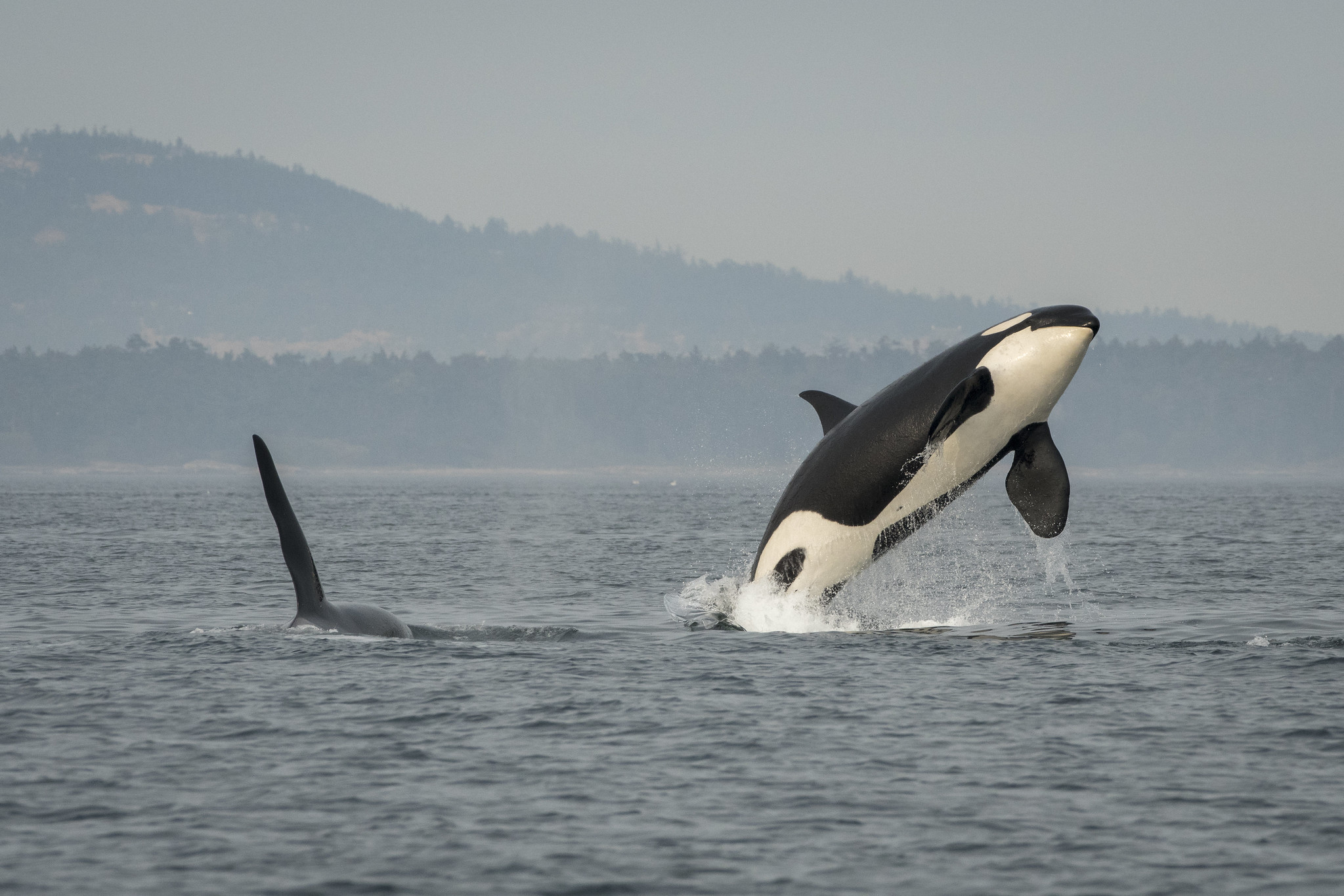 There are only 75 Southern Resident Killer Whales remaining in the wild and they’re looking directly at extinction if things don’t change. They are emotionally intelligent animals with complex family dynamics and a deep spiritual connection to the tribes and first nations in the Salish Sea area.

Listen to this limited podcast series, where we explore issues related to salmon, noise, contaminants, culture, history and more, with some brilliant guests joining us along the way.

anchored to the seaﬂoor to maintain position. Gaydos grabs coﬀee and prepares for his weekly team meeting. On the docket today: SeaDoc’s 5th-grade curriculum has been adopted by Tacoma public schools; a draft recovery plan for endangered pinto abalone has been written and needs review; and the ﬁnal episode of SeaDoc’s Southern Resident Killer Whale podcast, Pod of Orcas, will air later in the week. After the meeting, Gaydos joins the rest of the surgery team at the Mobile Animal Surgery Hospital (MASH), parked on land near the marina where boats departed ﬁve hours earlier. On the water, one by one, scoters have ﬂown into the mist nets. Each bird is gently removed and transported to the surgery site, where Gaydos aﬃxes a satellite transmitter, which will allow researchers to track the bird’s detailed location for months.

“Knowing where these birds go to feed, rest, and fatten up before they migrate north to nest in the spring is critical for understanding their decline and finding out what we can do to help with recovery,” said Gaydos. “These transmitters will help us track these scoters like a parent tracks their newly licensed teen driver.”

By midday, the team has tagged and released ﬁve birds, and after a meeting to assess the day’s work and contemplate the next steps, Gaydos and Friel are back on the road, this time across the border. The Salish Sea boundary is split horizontally down the middle by the U.S.-Canada border, which has major conservation implications on a political level, but might as well be nonexistent to the wildlife.

It’s a challenge SeaDoc Society works hard to address through relationship building and collaboration, and by telling stories like the one that’s bringing them there today. Gaydos and Friel pull up to their destination on the Harrison River shortly before sunset, leaving just enough time to scout locations, admire the landscape, and even watch eagles feeding on salmon carcasses. That salmon’s life may be over, but its contributions to the ecosystem, from the trees that line the forest to the bald eagles feeding on them, has just begun. Protecting that natural function is SeaDoc’s mission.

Moving Toward the Future

On A Wing and a Prey-er